Networkization of societies has contributed to an exponential increase in the number of relationships, both, face-to-face and virtual. This relationships abundance has made people think of how they can build and maintain value-added relationships? How can they decide the intensity and closeness of relationships? The tendency has led to developments in the concept of Return on Relationships (RoR).

Return on relationships (RoR) is defined as “the value accrued by a person or a brand due to establishment, maintenance and nurturing a relationship” (Gummesson, 2004; https://kalicube.pro/entity/return-on-relationship/). The definition lays the framework for constituent parts of the concept-oriented broadly around value over time and the interactions.

The constituent parts of RoR

While broadly RoR is made up of mainly two components i.e. interaction over time and value, there are a number of elements that embody the spirit of these two components providing a more elaborate structure of RoR. We discuss some of these constituent elements below.

A basic example could be when a customer purchases a product or service, s/he expects product/service does what it is supposed to do and performs at the advertised level of quality. On the other hand, the seller of the product/service expects to get the payment or anything else in return as per terms of the transaction. If this transaction is made in good faith and as per terms of trade, it is likely that the relationship will flourish; customer will do further transactions and in return the seller will continue providing quality products/services, resulting in a high RoR achieved by both parties.

(3) Perception of value and time relevance

Further, RoR will also be affected by time. For one party, the relationship could be highly meaningful and valuable at a certain point in time and for the other, it may not be so much. Such a scenario will affect the perception of value and realization of RoR. In hindsight, if the RoR remains low for an extended period of time for one of the parties, then it will have an impact on the longevity and continuity of relationship.

5) Marriage of convenience or the context of events

Given the conceptual constituents of RoR, the formula for RoR takes into account mutual value that the parties involved in the relationship created. Grönroos and Helle, (2012) provide one such formula in the context of a customer and supplier relationship which reads as:

In the above equation, RoRR = Reciprocal Return on relationships

But given the focus of this article is on project management (PM), we propose a refined version of the above formula in PM context as follows:

In the above equation, RoRPM = Return on Relationship (due to using of PM)

We proposed that Earned Intangible Value (EIV) will occur from a number of areas with a positive or negative value due to actions of project organization (PO). Some of such areas are:

Simply put the RoR formula looks into how value is changed from current to a proposed state once parties come into the relationship. It also takes into account relational investment by both customers and project organization/ suppliers (Grönroos & Helle, 2012). The above RoR formula seems to provide a basic framework to extrapolate it to other contexts such as PM context.  It must, however, be noted that RoRPM formula is a proposed version that needs to be tested in a real-life project context to confirm and refine it further.

And beyond: The conceptual diagram of RoR progression

Having reviewed the foundation and measure of RoR concept, it is imperative to examine the correspondence between relationship intensity (triggered by interactions) and time to see how these two dimensions contribute towards RoR and what other things emerge from this correspondence. As such, we have proposed a two-dimensional conceptual diagram that encapsulates the progress of RoR overtime. The conceptual diagram draws upon the explanation of elements and triggers of RoR as explained in some of the earlier studies (e.g. Grönroos & Helle, 2012; Gummesson, 2004; Witell et al., 2020).

We argue that the relationship intensity progresses in four stages over time as shown in the diagram below. It is important to note that the Time dimension signifies accrued time, which means leap from one stage to the next stage is based on accrued interactions at the past stages. 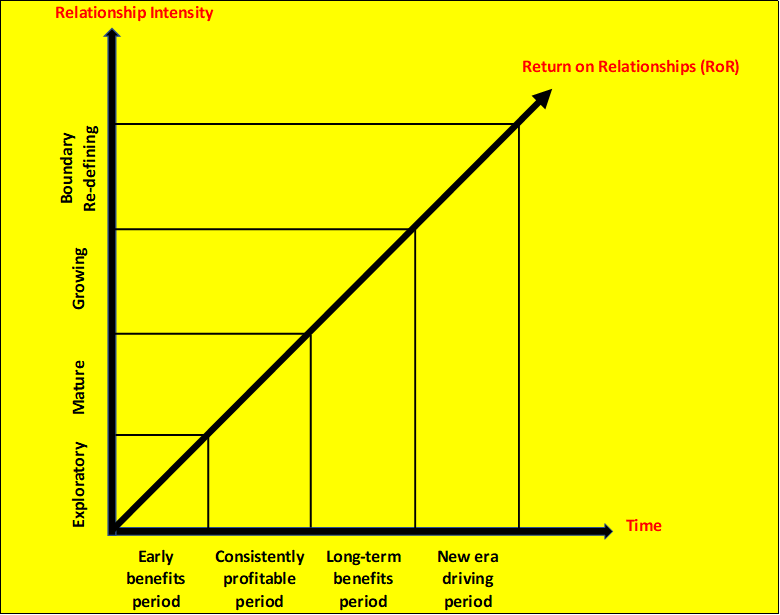 Conclusion:
The expanded use of social media and other digital technologies have necessitated re-conceptualization and redefining the concept of value of relationship. In this regard, RoR is a useful concept that captures the joint gains realized by parties in a relationship. Just like a return on investment concept, RoR is also measurable by formula (Grönroos & Helle, 2012). While providing an overview of the concept and its measure, we have extended the concept by proposing a formula of RoR in PM context as well as a new conceptual model of RoR. The model encapsulates the increase in RoR due to interaction or relationship intensity overtime. Needless to mention that the proposed conceptual diagram can be further extended and tested by collecting some empirical data.

Jiwat is a Professor in Project Management. He has considerable experience of working internationally in diverse cultures and business environments.

Jiwat is currently serving on the Editorial Board of International Journal of Project Management.

Jiwat actively contributes to project management community. His work has been published in top scientific journals and Four of his published papers have remained in Top25 most downloaded papers. Additionally, two of his papers have been ranked as the Most Cited article published since 2012. More recently, he has published a number of articles on some of the issues confronting project management in various industry based outlets.