Against all odds – learning from great projectors: Vasco da Gama

Vasco da Gama was a Portuguese and the first European to reach India by sea. His initial exploration to India (1497–1499) was the first to link Europe and Asia by an ocean route, connecting the Atlantic and the Indian ocean. The distance traveled in the journey around Africa to India and back was greater than around the equator. He started in Lisbon, sailed along the coast of Africa via Tenerife and the Cape Verde Islands to the Cape of Good Hope, passed by Mozambique, Mombasa and Malindi (Kenya), where he was not welcomed as a Christian interfering into the trade relationships of the Arabs. After decades of sailors trying to reach the Indies, with thousands of lives and dozens of vessels lost in shipwrecks and attacks, Vasco da Gama landed in Calicut on 20 May 1498. Unopposed access to the Indian spice routes boosted the economy of the Portuguese Empire. The spices obtained from Southeast Asia were primarily pepper and cinnamon at first, but soon included other products, which were all new to Europe. 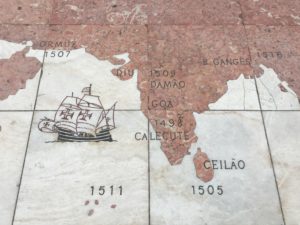 The return was not as lucky as the journey to India. Heavy monsoons hit the ships. The fleet finally arrived in Malindi on 7 January 1499, in a terrible state – approximately half of the crew had died during the crossing, and many of the rest were afflicted with scurvy. Da Gama’s brother, Paulo da Gama, had fallen ill and died on the way back home. Anyway, the news of the discoveries spread across the country and da Gama was awarded a substantial hereditary royal pension, the noble title of Dom (lord) and the title of “Admiral of the Seas of Arabia, Persia, India and all the Orient”.

A second journey to India had a different purpose, it was more violent and affected the image of da Gama in a rather negative way. In 1502, the Portuguese India Armada was assembled on the order of King Manuel I of Portugal and placed under the command of Vasco da Gama. The trip was designed as a punitive expedition, targeting Calicut, to avenge the travails of the 2nd Armada and the massacre of the Portuguese factory in 1500. Vasco da Gama arrived back in Portugal in September 1503, effectively having failed in his mission. This failure, and other political reasons caused the Portuguese king to appoint Francisco de Almeida to be the first governor and viceroy of Portuguese India in 1505, da Gama was conspicuously overlooked. Later he was awarded the title of viceroy, but on his third voyage to India in 1524 he got sick and died.

What is the legacy of Vasco da Gama? He is certainly one of the most famous and celebrated explorers from the Age of Discovery. As much as anyone after Henry the Navigator, he was responsible for Portugal’s success as an early colonizing power. Beside the fact of the first voyage itself, it was his astute mix of politics and war on the other side of the world that placed Portugal in a prominent position in Indian Ocean trade. Following da Gama’s initial voyage, the Portuguese crown realized that securing outposts on the eastern coast of Africa would prove vital to maintaining national trade routes to the Far East. The violent behaviour shown during the second voyage and cruelties against pilgrims are a shadow on his image that could have been avoided.