Against all odds – learning from great projectors: Ferdinand Zeppelin

With this article we´d like to start a series of pioneers and projectors to learn from. You are all encouraged to write about great projectors out of your context so we may learn from them and improve our way of performing projects. “Projector” is a term introduced by Daniel Defoe in “An Essay upon Projects” (1697). It refers to people that “project” into the future and thus make them real. A true projector is “he who, having by fair and plain principles of sense, honesty, and ingenuity brought any contrivance to a suitable perfection, makes out what he pretends to, picks nobody’s pocket, puts his project in execution, and contents himself with the real produce as the profit of his invention.” History is full of those people, let´s make use of their stories by explaining the narrative behind. 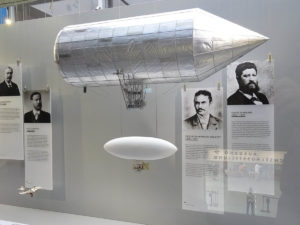 We´ll start the series with Ferdinand Zeppelin, a German count who got famous through his Zeppelin airships. He was raised at the shores of Lake Constance. During his military career he spent several years in the US, observing the American Civil War. During his visit to the US he launched several times a balloon for observation reasons and thus performed his first steps into an exciting new area and gained interest in aeronautics. After his resignation from army  at the age of 52 he could spend more time on his idea of large dirigibles, Postal Services as well as military application. In a letter to the King of Württemberg he outlined basic principles of a large rigidly-framed outer envelope containing a number of separate gasbags. This was also a reaction on developments in France and other countries, mainly for military purposes at this time. But the German military refused the designs proposed by Zeppelin. Several industrial leaders supported his idea after a lecture on steerable airship designs given to the Association of German Engineers (VDI) in 1896. A joint stock company “Gesellschaft zur Förderung der Luftschifffahrt” was founded with financial means of Carl Berg, Philipp Holzmann, Daimler, Max von Eyth, Carl von Linde and Friedrich Voith. 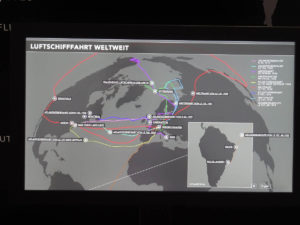 The first Zeppelin airship with the abbreviation LZ1 was built. During its first flight it could carry 5 people on board, reached an altitude of more than 400 Meter and achieved a distance of approximately 6 km in 17 Minutes. However, the engines were to weak and could not stand a longer flight. After an emergency landing the whole endeavor seems to be finished. Five years later, after a state lottery raised some money and several people donated more, the development continued. But most of the next airships failed, the worst disaster happened close to Stuttgart, when LZ4 burned. Nevertheless, the public interest gained speed and more than 6 Million German Mark could be collected. They were used to create “Luftschiffbau-Zeppelin GmbH” and the Zeppelin Foundation. Up until 1914 nearly 40,000 people on more than 1,500 flights were transported without any incident. Zeppelin shaped the age of air transportation. The success story continued even after his death in 1917. The Zeppelin was used as a means of transport on a global scale. During the 1920s several transatlantic flights were performed, connecting Germany with the US and Brazil. Other ships performed long-distance-flights and proved the concept of Zeppelin crossing the pole region. The devastating disaster of LZ 129 Hindenburg in 1937, along with political and economic issues, ended the era of the Zeppelins. 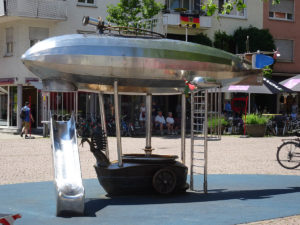 Ferdinand Zeppelin was excited about the idea of large airships. He pursued his ideas against all odds by raising the interest of the public. Financially, the donations made him survive with his idea. Nowadays we would call this “crowd funding”. The new approach caused him to resolve many troubles. Firstly, the engines provided by Daimler (designed for usage in first automobiles) were not sufficient, not fast enough and not able to deal with conditions in high altitude. Therefore, he engaged people like Wilhelm Maybach to develop engines that were able to cope with these challenges. He needed light-weight aluminum frames, which are still used in Automotive Industry. Gear mechanisms were too rigid and thus he founded his own factory which designed and produced its own gear mechanism, nowadays one of the largest companies in the world called “ZF – Zahnradfabrik Friedrichshafen”. All in all, Ferdinand Zeppelin was founder and enabler of many famous companies in and around Friedrichshafen, for example Dornier and Maybach. The Zeppelin Foundation was a wise mechanism to safe-guard the achievements for a sustainable future. All profits of the Zeppelin and ZF companies are put into the foundation. They are re-invested, spent for the people of Friedrichshafen and for charitable projects. The foundation also financed during the 1990s the development of a new Zeppelin, the Zeppelin NT. It is considerably smaller than the old Zeppelins, semi-rigid and lightweight, propelled by three 147-kilowatt Textron Lycoming IO-360 boxer aviation engines and fueled by standard aviation gasoline. The Zeppelin NT is mainly used for sight-seeing and can carry up to 12 passengers.  It means, the idea of airships is still alive, made real by Ferdinand Zeppelin, a true projector…