Against all odds – learning from great projectors: Alexander von Humboldt 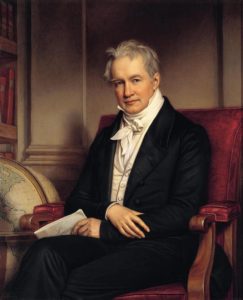 Friedrich Wilhelm Heinrich Alexander von Humboldt was a Prussian geographer, naturalist, explorer, and influential proponent of Romantic philosophy and science. He was born in 1769 into a rich and influential Prussian family and raised during the Age of Enlightenment by important thinkers, such as the Kantian physician Marcus Herz and botanist Karl Ludwig Willdenow, who later became one of the most important botanists in Germany. Humboldt’s passion for travel was of long standing. All his talents were devoted to the purpose of preparing himself as a scientific explorer. With this emphasis, he studied many different topics, including but not limited to commerce, foreign languages, geology, anatomy, astronomy and the use of scientific instruments. After studying he was appointed to a Prussian government position in the Department of Mines as an inspector in Bayreuth and the Fichtel mountains. During this time he conducted research into the vegetation of the mines of Freiberg, which led one of the first publications in Latin (1793) of his Florae Fribergensis, which was a compendium of his botantical researches.

Humboldt exchanged ideas and research results with Goethe and Schiller in Weimar, travelled to Vienna, Italy and Switzerland, meeting important researchers and continuing his research. After the death of his mother he was looking for another opportunity to become a scientific explorer. First, he wanted to join Napoleon Bonaparte in Egypt, but the turmoil of this time hindered him to start into the endeavor. Later, he approached the Kingdom of Spain for approval. When Humboldt requested authorization from the crown to travel to Spanish America, most importantly, with his own financing, it was given a positive response.

In 1799, together with Aimé Bonpland Humboldt started his first exploration towards Latin America. Originally, he wanted to land on Cuba, but was diverted to Venezuela, which did not really affect his research much. He proceeded with Bonpland to Caracas where he climbed the Avila mountain with the young poet Andrés Bello, the former tutor of Simón Bolívar who later became the leader of independence in northern South America. Humboldt met Bolívar later in Paris and spent some time with him in Rome. Later Humboldt and Bonpland left the coast with the purpose of exploring the course of the Orinoco River and its tributaries. This trip, which lasted four months and covered 2,776 km of wild and largely uninhabited country, had the important result of establishing the existence of the Casiquiare canal (a communication between the water-systems of the rivers Orinoco and Amazon), and of determining the exact position of the bifurcation, as well as documenting the life of several native tribes.

Several other trips to the Americas followed between 1800 and 1804, exploring Cuba, The Andes, Ecuador, Peru, Mexico and the United States. Humboldt kept a detailed diary of his journeys to Spanish America, running some 4,000 pages, which he drew on directly for his multiple publications following the expedition. Humboldt’s decades’ long endeavor to publish the results of this expedition not only resulted in multiple volumes, but also made his international reputation in scientific circles. Humboldt came to be well-known with the reading public as well, with popular, densely illustrated, condensed versions of his work in multiple languages. Later his work was labeled as Humboldtian science, which can be defined as “the accurate, measured study of widespread but interconnected real phenomena in order to find a definite law and a dynamical cause” Humboldt spent the rest of his life mainly in Europe, although he did embark on a short expedition to Siberia and the Russian steppes in 1829. Humboldt’s last works were contained in “Cosmos. Sketch for a Physical Description of the Universe”.

Humboldt was a generalist who connected many disciplines in his work. He combined ecology, geography and even social sciences. The work on the “Cosmos” attempted to unify the sciences then known in a Kantian framework. With inspiration from German Romanticism, Humboldt sought to create a compendium of the world’s environment. Today, many species, places, geographical features, universities and even astronomical features are named after Humboldt. Simón Bolívar wrote that “The real discoverer of South America was Humboldt, since his work was more useful for our people than the work of all conquerors.”

What can we learn from Alexander von Humboldt? It´s the real world that teaches us a lesson. We do not find the answer on our questions in a textbook, but exploring nature and collecting experiences is what makes us understand better and help us to cope with the challenges of our time. Humboldt was also very influencial for the German education system. It is a concept of academic education that emerged in the early 19th century and whose core idea is a holistic combination of research and studies. Sometimes called simply the Humboldtian Model, it integrates the arts and sciences with research to achieve both comprehensive general learning and cultural knowledge, and it is still followed nowadays. Study should be guided by humanistic ideals and free thought, and knowledge should be formed on the basis of logic, reason, and empiricism rather than authority, tradition, or dogma. Here we can close the loop to what Daniel Defoe saw as the key competence of a projector…