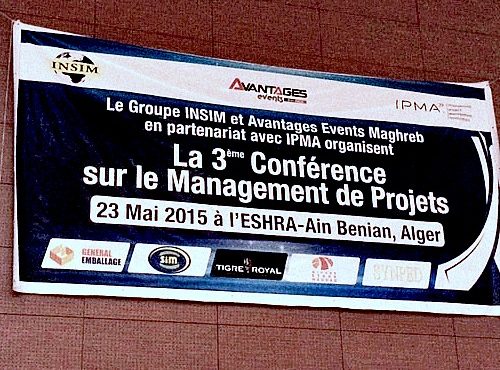 Project managers from all over Algeria met for the third time during a conference initiated by IPMA (Training Aid programme) in Algiers and organised by INSIM and Advantages Event Maghreb to promote project management as a way to translate visions and strategies into Reality.

The third conference in Algeria took place on 23rd of May 2015 in Algiers at the Ecole Supérieure d’Hotellerie et de Restauration Algérienne (ESHRA), a 15 hectares resort on the Eastern side of Algiers, the capital of 5 million inhabitants. The objective of the conference with 120 attendees was threefold: First, to increase the awareness on the strategic importance of project management for Algerian society as whole. Second, accelerate the formal creation process of the Algerian Association from Project Managememnt (AAMP), thanks to the participants and sponsors of the conference and their increasing engagement

Third, identify major stakeholders through the workshops organised in the afternoon on training, certification and association management. The main topics covered during the conference were: the global trends of Project management and their impact on society, the IPMA competence baseline and certification of competences, best practices in Algerian family business in the agro-business, state-owned companies in transport, multinational companies, how project management can contribute to change, how competences are certified and how IPMA and a Algerian Project Management Association could develop a career plan in project management.

The title “Project management: challenges and best practices in Algerian companies was well reflected in presentations delivered by a project Director for the construction of the Metro in Algiers, by a project manager for the production of juices according to international standards in the food industry and a project director of Alstom for the construction of the tram in Oran. Algeria is developing its public transport network as the traffic congestion due to cars as main means of transport in major large cities are causing tremendous losses to the Algerian economy. The average Algerian spends 3 hours per day on his car for commuting on very short distances due to heavy traffic and poor road infrastructure.

Algeria has chosen to work both on turnkey and non turnkey projects in order to create employment and catch-up with delays in the planning and implementation of its transport infrastructure. Among the participants where executives and representatives from private companies such construction, hotel business, training and consulting companies and IT providers; public companies and administrations such universities, executives from the national oil company and local authorities.

The Maghreb and Algeria in particular are undergoing profound changes. Thanks to close economic to Europe, the United States and China, many investments projects facilitated by important oil and gas revenues Algeria presents a high potential for the development of local project management capacities. In this context, IPMA is incubating the creation of an Algerian Project Management Association. From the picture below you can see that Algiers, the political business capital of Africa’s largest country is seeking to open up its economy after 20 years of planned economy following the socialist development model chosen in the late 60s after 132 years of French colonisation and becoming independent in 1962.

Finally, the event was also a right place to advertise IPMA Congress in Panama and to invite the participant to IPMA’s 50th anniversary. The location of the conference which was only terminated 6 months ago is able to host events with more than 1000 participants, and why not a congress and regional conference of IPMA in the future.

Until then, the Algerian Project Management in creation still has some work to do!

The conference resort in Algiers at ESHRA, with direct access to the sea and a marina (under construction)