Managing projects and programs often means dealing with ever-increasing complexity and volatility. Project and program managers together with their teams are required to give their best to achieve the desired outcomes for stakeholders, organizations and/or society. These achievements were the main drivers to initiate the IPMA Project Excellence Awards, later followed by the Otto Zieglmeier Award and the Achievement Awards.

In November 2016, IPMA celebrated the 15th anniversary of the Project Excellence (PE) awards at the 19th IPMA Poland Conference in Warsaw. More than 300 people were present at the Gala ceremony where project management teams  that have achieved top performances were internationally recognized as best examples of project excellence.

This year the PE competition was driven only by mega-sized projects with budgets of over 1 billion Euro, realized in different locations, with high complexity and a significant impact on their societies,  projects that achieved excellence in various ways. 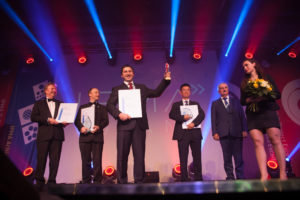 The Otto Zieglmeier Award was presented to Grzegorz Szalajko recognizing his outstanding work on the PE Awards development and the new Project Excellence Baseline.

The Achievement Awards acknowledged the follow project managers and projects:

Mary Koutintcheva has more than fifteen years’ experience in the financial industry working for two of the largest Swiss banks – UBS and Credit Suisse as a program and project manager in Business and IT, implementing global solutions for Private and Investment Banking. She won the PE Award with her UBS IT team in 2003. Ever since, she has stayed with the PE Awards in a number of functions, including  jury member, jury chairman and award ambassador. For eight years in a row, she has steered the IPMA Award Management Board in the role of the Award Board chairman. Tirelessly, she has been active on stage and behind the scenes to keep the PE Awards alive and to promote them